Bentwood chairs are certainly the most recognizable and one of the most established chairs that have ever been produced. The simple, yet elegant design is found around the world and is arguably the best in terms of its structure, sturdiness and beauty. The bentwood chair has stood the test of time and is arguably more popular today than it ever has been before.

The name “Bentwood” is derived from the fact that the wood on the chair has been bent into position. Using a combination of heat and moisture, the wood becomes soft and flexible enough to bend into different shapes. Once it dries out, the wood becomes hardened and keeps it new shape for many years to come.

There are many different types of wood that can be used, although ash and beech are generally the best because they can bend easily and do not crack like other, harder woods tend to do under the process. Today, Bentwood chairs are found in millions of homes, businesses and facilities and have never really gone out of style.

The Origin of the Bentwood or Thonet Chair 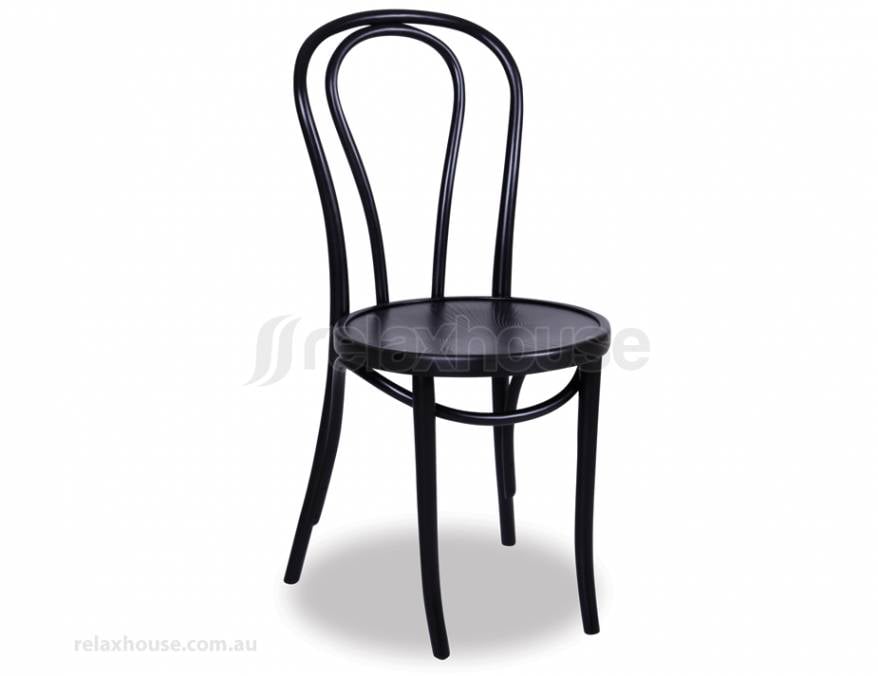 A Bentwood chair is sometimes called a Thonet Chair in honor of its creator Michael Thonet. While bentwood chair were actually being made at least two centuries before Thonet was even born, he perfected the process which made the wood easier to bend and allows for mass production to begin.

Michael Thonet was born on July 2nd, 1796 and for the first thirty years of his life was basically a cabinet maker. However, by the mid-1830s he had perfected a process of making furniture out of a combination of bent and glued wooden slats. The Boppard Layerwood Chair was his first true success, although he failed to get a patent for the technology he created to make the chair from several different countries.

Basically, the Thonet chair was the result of using light, strong types of wood that were bent into curved, very graceful forms thanks to the use of hot steam. In this manner, he could create a myriad of designs that were unique, comfortable and quite durable. Despite his initial setback, his use of hot steam and selection of wood set the tone for bentwood chairs of the future. By the outbreak of the American Civil War in 1861, Thonet had built his first factory and began producing a number of different designs. The most popular chair was simply titled Thonet “No 14”, although it has been called the Vienna or Qitay chair. The design is the quintessential coffee shop chair and it has been in continual production since the factory first opened. To date, over tens of millions of No 14 chairs have been produced.

The most innovative aspect of bentwood chairs in Thonet’s eyes was their expendability due to their mass production. At the 1867 World Exhibition in Paris, Thonet earned a gold medal for his design and the popularity of the chair began to grow exponentially. In 1889, a member of the Thonet Company famously threw one of their chairs off the Eiffel Tower where it smashed upon impacting the ground. The crowd was most appreciative and sales of the chairs went through the roof at that point.

The manufacturing process that Thonet had developed was quickly copied by others and Bentwood chairs of all types started appearing all over the world. Many of the top furniture designers in the world have put their own stamp on this unique chair thanks to the many different shapes that could be created. By the end of the 19th century, Bentwood chairs had truly entered a new age with the burgeoning economies of Europe and the United States opening up a whole new market of people who could afford the low priced chair for their homes. Thonet Bentwood Chairs in a restaurant

There have been a number of famous people who have owned Bentwood chairs, from world leaders to painters to scientists and more;

In fact, Lautrec’s work, “At the Moulin Rouge” you can actually see two Bentwood chairs in the painting. Of course, there have been many other people who have owned Bentwood chairs which makes them a rather iconic symbol of our times.

Another interesting fact is that of the 80+ million Bentwood chairs that have been sold since their first creation, more than half of the sales occurred before 1930. While this particular type of chair is still highly popular, other types of chair designs have weaved their way into the general public. This means that the chair itself is not quite as popular as it once was, but it still holds a powerful place in our culture.

While Thonet himself used glue when he first started creating the chairs, there is no glue or binding compound used today. Interestingly enough, Thonet actually purchased a glue factory so that he would have a steady supply for his chairs, only to see the very first one in 1856 that didn’t require any glue. Known as “No 1”, the chair did not require any glue at all which left Thonet with a factory that he did not need.

The famed No 14 chair only required a couple of nuts and screws to put the six pieces together. It was so simple that many people purchased the chair while still in pieces and then put it together themselves. A simple set of instructions was sent along with the chair, although it is not known if a certain company in Sweden got the idea for their business from this particular chair or not.

Despite more than 80 million Bentwood chairs having been produced, not two are exactly alike because they are made from different sets of timber so they are each unique even if they look much alike. In fact, if you put any two of the chairs next to each other, you’ll be able to spot the differences in the grain and other aspects as well.

There is little doubt that Bentwood or Thonet chairs changed the furniture industry and today are still some of the most popular ever made.