Scandinavian interior design can best be described as minimalism with a great emphasis on style. Over the past century, Scandinavian design in furniture has reflected the sensibilities of those who live in Sweden, Norway, Denmark and Finland who enjoy ample interior space, plenty of natural light, and a feeling of being one with nature.

The open nature of Scandinavian design mixed quite well with the modern movement in furniture creation which also emphasized a minimalist nature. The simple lines, open face, and emphasis on functionality are part of every piece of furniture that uses this particular design mode. You can spot this particular type of furniture rather easily thanks to the inherent natural elements, neutral color palette, simple, almost sleek lines, and an emphasis on function over form.

Because of its simple, fuss-free design it has been accepted all over the world and can be found in many different cultures. It all comes down to the principle of less being more when it comes to furniture design. Scandinavian design is the very essence of that concept and has been present in the Nordic countries for many years previous to its breakout in the post-World War II era. Minimalism is another excellent word to describe this type of design that offers everything in its simple, straightforward approach.

Given that, there are several design parameters when it comes to identifying Scandinavian design, particularly in furniture which stands in stark contrast to the ornate, busy designs that were common in most of Europe before World War II.

Simplicity is the founding element of this type of design with function being at the center. However, the function of the product is achieved all with a sense of style through simple, clean lines that bring an air of sophistication while allowing for comfort. Essentially, Scandinavian design embraces the core element of what most people want in furniture, to have a functional, comfortable piece that exudes sophistication through its clean, elegant lines.

The Arne Jacobsen 7 chair may be the best example of what clean lines are all about. This particular design has found its way into millions of home and offices around the world thanks to its unique combination of sturdiness combined with delicate lines. It takes up relatively little space, but it offers a very timeless look that works in different types of rooms. It is especially useful in small or compact spaces and today it is still a sought-after design in furniture. The colors found in this type of design are generally neutral and muted which denote qualities of serenity that add to the décor of the home. Bright white is the most recognizable color associated with this décor as it reflects light to make the room appear brighter and even more spacious even on a dark or cloudy day.

It may seem that neutral colors would be rather dull, but on the contrary they actually provide a vitality that brightens up the room and adds to the overall design. When accented properly with the appropriate accessories which provide balance and personality, the neutral colors play very well in most homes and offices. If anything, it helps them to stand out to an even greater degree.

Bringing Nature into the Home Scandinavians love nature and they bring it into their homes with the simple designs of their furnishings. It’s little wonder why you see so much wood incorporated into their interior design, particularly in furniture and flooring where you can almost feel like you are outside with all the comforts of home.

There is an emphasis of beech, ash, and pine and only light staining or varnishing to keep that sense of light and the feel of being outdoors. You will also find potted plants as part of the home as well. Of course, the furniture is heavily wood and it reflects its natural qualities with minimal changes. What helps make Scandinavian design so appealing is how it helps reflect the natural light even on days that are cloudy. In many Nordic homes, the windows are large and whatever treatment is used is kept to a minimum. With careful placement of mirrors to help expand the space and add more light, the overall design is one that feels very open even in a relatively small room.

This is where the furniture becomes very important by being simple, clean, compact, and very comfortable. When adding electric lighting or candles as often the case in Nordic homes, the overall effect is one that is natural and inviting without being cluttered which provides for a very attractive space.

In addition, there is a sparing use of textiles so that the entire interior is not weighted down. However, you will find bright rugs, a few cushions, and sometimes stripe patterns on some of the furnishings that add a robust feel to the entire room. You will also see a lot of natural fabrics being used such as wool, linen, and a lot of cotton to add to the natural feel of the interior. Furniture however doesn’t usually have a lot of fabrics added, but when it does the lines are kept smooth and natural. You can trace the origin of Scandinavian design back to the end of World War II when the world had changed considerably and new designs were being embraced. Until that time, most of Europe embraced a far more opulent design with many features that made furniture manufacturing on a mass scale at least difficult to fully realize. The Nordic people however enjoyed simple, straightforward designs which made it perfect for mass manufacturing.

The design itself sprang from the harsh winters and small homes that were present in Scandinavia for centuries. The people wanted their homes to be cozy, warm, yet open and airy with every object reflecting as much of the limited ambient light as possible. This shunning of ornate designs and embrace of the simplicity that became Scandinavian design was shaped by the environment and out of necessity. The end result is that the design managed to combine practicality with stunning beauty all thanks to its relative simplicity.

While elements of what would be known as Scandinavian interior design were present mostly in the Nordic countries for many years, it was not until 1947 when a popular design exhibition known as Triennale di Milano featured the furniture and accessories from the Nordic countries that the overall design really took off. Essentially, designers were looking to embrace a new movement and the timing for Scandinavian design could not have been better placed.

However, it still took several years for people around the world to purchase the new designs that were being crafted. From 1954 to 1957, the “Design of Scandinavia” show travelled across North American which resulted in millions of people seeing and becoming interested in having that type of design in their homes. Thanks to the burgeoning economy and ebullient spirit that was present in the US and Canada in the post-World War II years, the ideas behind Scandinavian design really began to take hold.

Huset offers a range of furniture from Famous Scandinavian designers such as Mads K Johansen. 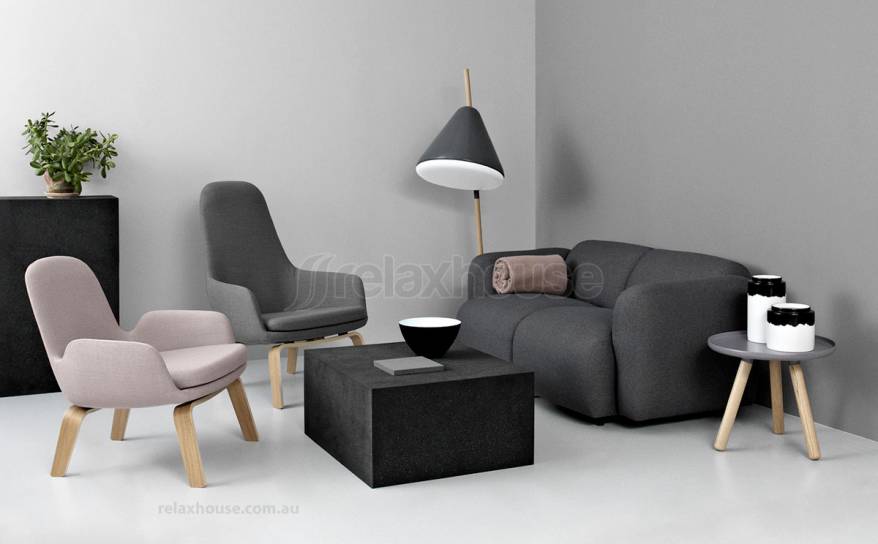 By the mid-1980s it seemed that Scandinavian design had run its course in terms of worldwide popularity. The simple, sleek, and practical design ideas that mostly centered on the furniture were fading as a new era was beginning in the mid to late 1980s that ran counter to the modern minimalist course that had embraced the simplicity of Scandinavian design.

However, by the 1990s there was a return to the movement thanks to designers who lived in Scandinavia switching their emphasis from mostly furniture to all objects or accessories that were used as part of the overall design.  Basically, every object was now created for its place in the décor as unique, bold statements that really helped revive interest in what seemed to be a fading part of the past.

Today, Scandinavian design is alive and thriving quite well in all parts of the world and while it may not be as fresh and new as it was in the 1950s, it still occupies a very high place in interior design, particularly when it comes to furniture.

Overall, putting the principles of Scandinavian interior design together in terms of the furniture provides the home with a natural feel that offers style and substance without a lot of material or clutter. The emphasis is on space and light which makes the home feel more open and accessible. The emphasis on family in Scandinavia is also part of the overall design which means cooking meals, sharing stories, and engaging in long hours of conversation.

Unitarian, elegant, sleek, and natural, Scandinavian furniture has come a long way since the end of World War II and is present in homes around the world thanks to its universal appeal. The minimalist approach keeps this type of furniture as well as the interior design in demand for today and the foreseeable future.