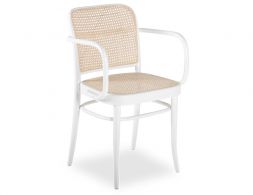 811 Bentwood Armchair in White with Cane Seat and Cane Backrest by TON CZ
Is now in your cart! Keep Shopping Checkout 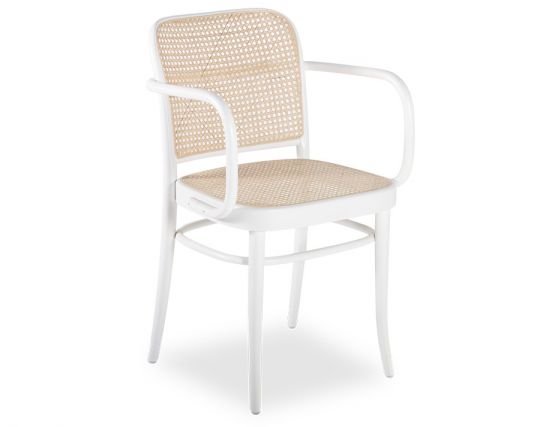 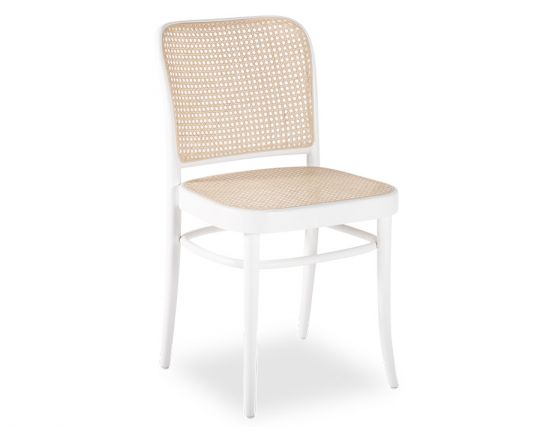 The 811 cane bentwood armchair, inspired by a model from 1930 by Josef Hoffmann, blends his interest in Art Nouveau and simple shapes with manufacturing processes applied in Bystrice pod Hostynem since 1861.

The armchair is therefore more geometrical, but bears the clear features of the manual bending technique of TON.

Timeless design with natural Cane seat and back brings a lightness to your space and comfort.

In the 1840s Michael Thonet began experimenting with bentwood furniture made by bending wood that had been steamed into a soft and pliable state. Over the next 20 years Michael Thonet and his sons developed the processes and machines that would allow them to build bentwood furniture in unprecedented quantities. It was in this time period that he developed what has become thought of as the "traditional" Michael Thonet designed bentwood chair: one featuring a back rest and back legs made from a single piece, a rounded cane or laminated seat, and front legs. In his effort to reduce the number of pieces used in building bentwood chairs, he had to connect the main elements that existed on different planes.  This could only be achieved by bending wood.  Michael Thonet's further experimentation with bending wood yielded amazing results.  By the 1850s, Michael Thonet's bentwood styles had become mainstream, and he was on his way to creating a catalog of bentwood chairs yet to be rivaled.

The output of Michael Thonet's factories was vast, due in part to his idea of designing separate pieces which would be combined to make a large number of models. Michael Thonet stands out as a designer and pioneer both in mass production and in design, as he artistically explored the new forms and unique qualities of his newly invented technique.  Remarkably few changes have been necessary over the last 150 years. The factory still follows the 19th century production methods developed by Michael Thonet to produce stylistically accurate, handsome, and sturdy bentwood chairs, bentwood stools, tables, and accessories.

Made in the Czech Republic by TON. In 1861, a bent furniture plant was opened in Bystrice pod Hostýnem and today it is among the oldest in the world. It was no coincidence that its founder Michael Thonet, whose name the plant bore, chose this place. Surrounded by beech forests offering enough material for the manufacturing process, Bystrice pod Hostýnem also saved on transportation and labour costs thanks to its location.